The Trinity debate, as recorded in the range of pamphlets collected by David Hughes at Queens’ College between 1722 and 1777, demonstrates the broader culture of debate in eighteenth-century Cambridge. Whilst pro-Trinity in his own beliefs and writings, William Stukeley was both a contemporary of Samuel Clarke (1) (subordinationist author of The Scripture doctrine of the Trinity (1712)) and friends with two other key nontrinitarians of the time, Isaac Newton (2) and William Whiston (3).

Isaac Newton, frontispiece to the 3rd edition of Principia [R.2.38]

Stukeley was elected a Fellow of the Royal Society in 1718, at which time Newton was president, and his personal correspondence suggests that he may even have been the originator of the famous apple anecdote. Whiston was notoriously outspoken in his nontrinitarian stance, publishing Athanasius convicted of forgery (1712) [R.8.61(4)] (on display in Queens’ current exhibition) and other vehement nontrinitarian pamphlets, which ultimately led to expulsion from his Lucasian professorship at Cambridge in 1710. Yet 26 years later Whiston attended and presented experiments at Stukeley’s Brazen Nose Society (an association he founded in Stamford to replicate the more vibrant social scene of London).

The nature of eighteenth-century pamphlet culture and debate meant that these men operated in the same circles, amongst mutual friends and acquaintances, hence a lively exchange of ideas encouraged by this proximity can be envisaged. David Boyd Haycock has argued that Stukeley directed his antiquarian works specifically towards Newton, Whiston and Clarke as nontrinitarians. Despite coming to differing conclusions, they shared common ground for debate: Stukeley’s arguments were founded on primary source pagan writings and stone circle archaeology, just as Whiston and Clarke referenced original scripture. Via pamphlets such as those collected by David Hughes, they were able to publish, distribute and debate their ideas with a wider reading public – both within the university and beyond.

Evidence of the reading public is sometimes visible on the pamphlets themselves. The Stukeley example is well annotated by hand; although, unfortunately, many of the pages were cut during binding, removing large sections of the writing. The comments move between English, French and Latin – sometimes within the same note!

The annotator has underlined ‘Evohe!’ and added ‘This is the shout of Bacchus’ followers’ in French in the margin [P.10(13)]

They appear to remark especially on Stukeley’s Latin quotations, for example giving a translation of the Horatian ode being discussed by the author. 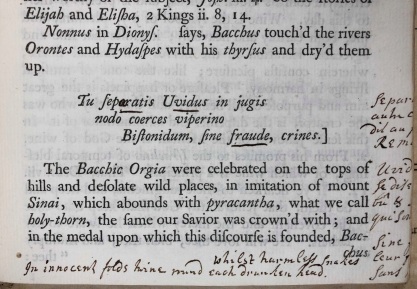 Stukeley’s ode in Latin, with cropped annotation in Latin in the margin, and an English translation at the bottom of the page [P.10(13)]

The final page is uncut, and heavily annotated, giving a better insight into the reader’s thoughts on Stukeley’s text.

Here the reader quotes from Francis Hare’s Scripture vindicated from the misinterpretations of the Lord Bishop of Bangor (1720) [P.83(6)]. In the quote, Hare condemns the Pantheisticon, a controversial text by John Toland (4) in which he used pagan texts to imitate a Christian liturgy.

The reader clearly links Stukeley and Toland, but the reasoning is unclear. He could be suggesting that Stukeley, like Hare, was criticising Toland’s blasphemous use of pagan texts by demonstrating their proper use. On the other hand, he might be implying that Stukeley and Toland were equally deserving of Hare’s criticism, since both men used pagan texts to make direct parallels with Christianity.

This annotation is particularly interesting since it demonstrates the philosophical context within which these pamphlets were read in Cambridge. Readers, like our annotator, had clearly read many such publications, and seemingly studied and remembered each one within the context of ideas put forward in others. Stukeley himself may have intended his argument to be read within a certain context and by specific people. However, the huge corpus of pamphlets printed in the course of the eighteenth-century, as well as the ready availability of environments to discuss them (within the university and more publicly in coffee houses) meant that readers could debate, dissect, quote and criticise them within their own frame of knowledge. We are extremely fortunate, therefore, that David Hughes had the foresight to collect and collate so many of these publications at the time, for future reference – thus preserving a unique record of debate in Enlightenment Cambridge.

Samuel Clarke (1675-1729) was an Anglican clergyman and philosopher, educated at Caius College, Cambridge. As a personal friend of William Whiston and fellow supporter of Newton’s nontrinitarian views, he translated and revised works for both men, before embarking on a public correspondence in defence of Newton with prominent German philosopher, Gottfried Leibniz, in 1715-16. Clarke became known for his efforts to demonstrate the existence of God and, controversially, for his subordinationist views as outlined in The Scripture Doctrine of the Trinity (1712).

Isaac Newton (1642-1727) was a celebrated mathematician, physicist, astronomer, theologian and natural philosopher, whose ground-breaking contributions to classical mechanics, optics and infinitesimal calculus made him a key figure of the scientific revolution. The immediate impact of his theories concerning universal gravitation and the laws of motion, as outlined in Philosophiae Naturalis Principia Mathematica (1687), is confirmed by his enduring fame. Yet, in contrast, Newton’s nontrinitarian views were seemingly expressed more privately during his lifetime. Extensive research published posthumously reveals that he firmly believed Christ to be a ‘divine mediator’, subordinate to the Father. Newton was a Fellow of Trinity College and Lucasian Professor of Mathematics, as well as Member of Parliament for Cambridge University in 1689-90 and 1701-2. He served as Warden and Master of the Royal Mint from 1696 to 1727, was President of the Royal Society 1703-27, and was knighted in 1705.

William Whiston (1667-1752) was a theologian, historian and mathematician, as well as a prominent supporter of Isaac Newton’s theories. Remembered particularly for his efforts to instigate the Longitude Act and for his important translations, Whiston was also a leading exponent of Arianism, as outlined in his book A New Theory of the Earth (1696). His conclusion that Trinity teaching was a pagan invention ultimately led to his dismissal as Lucasian Professor of Mathematics at Cambridge in 1710.

John Toland (1670-1722) was an Irish freethinker and philosopher who studied at the universities of Glasgow, Edinburgh, Leiden and Oxford. He is best known for his work Christianity not mysterious (1696) in which he argued that all features of ‘true’ Christianity could be explained through reason and natural principles, as people could not assent to believe in something if they did not understand it. Like Stukeley, he had an interest in druids, especially the ancient Irish, and they are the focus of his Pantheisticon and Tetradymus (both 1720).