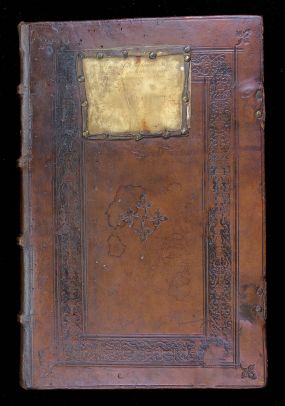 From their invention in late antiquity until the twentieth century animal skin was essential to the production of bound books. It is widely known that Medieval manuscripts were copied on vellum (i.e. calfskin) pages or leaves and that both manuscript volumes and early printed books had bindings made of leather, principally from calf, sheep, goat and pig. Skin was, however, not the only animal product to have been used in books. How else might animals have been used to make books?

One lesser known component in the production of early printed books was cow horn, used to make ‘horn windows’. Less costly than glass, cow horn had been widely used in the middle ages to make actual windows.  To do this, cow horns were soaked in water to soften them, heated and then cut and rolled into strips. A famous extant example is the horn window at Barley Hall, York.

In bookbinding, a horn window (also called fenestra) denotes a rectangular piece of transparent horn that is fixed to the front board of a book as protection for a paper or vellum label (see above).

There are in Queens’ Old Library three volumes that retain horn windows, all of them formerly owned by the same person. In each case the horn is held in place by a brass frame that encloses a parchment slip on which is inscribed details of how the book came to be in Queens’ Library:

The label shown above informs us that this book was given to Queens’ Library on 6 January 1562 by Thomas Yale. He was a distinguished civil lawyer who became Chancellor and Vicar-General to the Archbishop of Canterbury, Matthew Parker. Thomas Yale was also a fellow of Queens’ College between the years 1544-57 and served as College Bursar in 1556.

Before working for the Anglican Matthew Parker, Yale defended the Catholic Church within the University during the reign of Queen Mary I. Indeed he subscribed to the 1555 Roman Catholic articles affirming the doctrines of Rome and condemning the errors of the reformers. The following year, he assisted in the search for heretical books during a visitation of the delegates of Cardinal Pole, then Chancellor of the University of Cambridge and (last Roman Catholic) Archbishop of Canterbury.

The first entry in the Library’s seventeenth-century Donors’ Book retrospectively records the personal gift by Thomas Yale of four books (see above). These included:

The copy of Eusebius mentioned in the Donors’ book (above) cannot now be found in the Old Library. (It could simply be missing or the Library could have rebound the volume together with another volume as a result of which the original donor label could have been lost.) 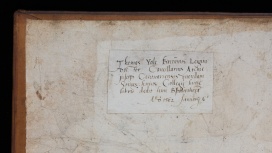 All three of these known Yale books bear a horn window that displays a similar donor inscription on the front cover. However, a further two-volume set (Origen, Operum tomi duo priores (Paris, 1522) [M.12.7-8]) not recorded in the Donors’ Book also bears a Yale donor label but on the front pastedown (i.e. inside front cover) of each volume rather than on the front cover under a horn window. It seems likely that these volumes were rebound in the seventeenth century, at which time the original labels were transferred inside the volumes and the horn windows were discarded.

Of the Yale books, two (Cyprian and Tertullian) are known to have shared a distinguished earlier owner prior to Yale. Their sixteenth-century blind-stamped bindings are ornately gilt-stamped with the initials ‘S.H.’ of Simon Heynes (or Haynes) (d. 1552) and the motto ‘Salus mea d[omi]n[u]s’ (The Lord, my salvation). Educated at Queens’, Heynes’ high-flying career included periods as Queens’ President (1529-37) and as Canon of Windsor, Prebendary of Westminster, and Dean of Exeter. He is remembered now specifically for his role as an early Reformer who assisted in the compilation of the first English liturgy.

After the 1534 Act of Supremacy when Henry VIII was recognised as ‘Supreme Head of the Church of England’, Heynes became an official anti-papal preacher in Cambridge, devoted to the Church of England cause. In March 1530, Heynes had helped to secure his university’s endorsement of Henry VIII’s case for a divorce.

Thomas Yale acquired these books through his wife, Joan (or Joanna) Walron (or Waleron), the widow of Simon Heynes, whom Yale married in 1561. It is interesting to note that Heynes (and then Yale) owned books by two Church fathers considered controversial by the Catholic Church (neither Tertullian nor Origin are recognized as saints due to their sometimes unorthodox theological positions).

Curiously, one of the volumes displays a somewhat blatant error committed by the binder when he was decorating the binding.  Having omitted a letter ‘u’ from the motto (‘Salus mea d[omi]n[u]s’/The Lord, my salvation) he sought to rectify the problem by inserting the letter above.

Although no other books with horn windows survive in Queens’ Old Library today we know of at least one source that suggest the earlier existence of further examples. An entry in the College’s Bursars’ accounts (QC Book 4) mentions the purchase of material to build and nail the metal frame of horn windows for books bequeathed by Laurence Hollenden in 1585.