The popularity of travel writing is immediately evident from the ever-increasing travelogues available on any library bookshelf or via the internet. In recognition of this literary success, a new exhibition in Queens’ College student library examines examples of historic travel texts from Queens’ Library’s collections, and their respective significance to the enduring travel genre.

Travel writing covers a vast array of forms and intended audiences, ranging from the traditional seaside postcard to comprehensive published volumes recording overseas expeditions, such as Charles Darwin’s 1839 Voyage of the Beagle. The genre can be personal or public, handwritten or published, autobiographical or educational, practical or entertaining, informal or political. Its purpose can range from merely recording memoirs for private use to providing information and/or guidance to a public readership. Even when essentially autobiographical in nature, a travel narrative intended for public distribution provides an edited version of the author in print. Edward Said’s work on Orientalism, for example, has analysed deliberate inaccuracy and political connotations in some travel writing.

Jean-Baptiste Tavernier, depicted in the 1679 French edition of his Six voyages [P.5.35]

Examples of both personal and public travel accounts survive from classical antiquity: Roman magistrate Pliny described his voyage to Bithynia in letters to the Emperor Trajan in 111AD, and Greek geographer Pausanias composed his Description of Greece later the same century. Commonly, travel narratives draw from personal experience and a desire to share this with a readership who have not visited the destination. Seventeenth century French travel writer, Jean-Baptiste Tavernier, in his Six voyages, part I (1676), recalled being “unable to tear his eyes away” from maps drawn by his cartographer father, and his delight to pen observations of his subsequent travels for Louis XIV. The 17th century saw an explosion in demand for travel writing across Europe: poet and critic Jean Chapelain, in 1663, declared it to be the “top choice at court and in the town”. Tavernier’s text alone was reprinted multiple times and translated from French into English, German, Italian and Dutch.

Queens’ Old Library holds examples of early printed travel writing dating back more than 300 years. These texts together illustrate the many guises of this complex genre through history: personal, public, political and practical.

From the age of four, Samuel Langhorne Clemens (1835-1910, pen-name Mark Twain) spent several years living, travelling and then working on the Mississippi River. His experiences there were to influence much of his writing – including his acclaimed novels, The Adventures of Tom Sawyer (1876) and Adventures of Huckleberry Finn (1885). During the 1860’s to 1870’s, Twain established himself as a travel writer, with travelogues for the Sacramento Union and Alta California newspapers, as well as travel-related books The Innocents Abroad (1869) and Roughing it (1872).

The volume is illustrated throughout, lending a visual aspect to the written descriptions

His success culminated in the Old Times on the Mississippi series, recounting experiences as a steamboat pilot in his youth. Originally penned for the journal Atlantic Monthly in 1875, these articles were subsequently expanded into Twain’s book Life on the Mississippi in 1883. As well as utilising his own experiences for the book, Twain drew on other accounts of the region, including Mrs Trollope’s Scenes on the Mississippi (1836) and Charles Dickens’ American Notes for General Circulation (1842). He featured direct quotes and paraphrased passages from the publications; even going so far as to send his editor a copy of Mrs Trollope’s text annotated with passages he wanted to include. There is debate about whether Twain, in haste to meet his deadline, relied on other travel narratives to ‘pad out’ his newspaper segments into a full book, or whether their inclusion was deliberate recognition of the broader travel corpus. Either way, the combination of Twain’s own anecdotes, quotes from other journals, and selected illustrations build a vivid image of travel on the Mississippi River in the 19th century.

As with many forms of literature, travel writing can assume political importance. Following the discovery of a trading route around the Cape of Good Hope in 1498, European countries, keen to acquire highly marketable Indian goods, competed for trade deals with the Mughal Empire. By the 17th century this competition was at its height. In France, those few travellers to have already explored India saw an opportunity to advise Louis XIV’s newly founded Compagnie Française pour le Commerce des Indes Orientales (est.1664). Gem merchant, Jean-Baptiste Tavernier (1605-1689), had travelled to India on six occasions between 1631 and 1668, becoming experienced in both mining and trading Indian diamonds. Most notably, he sold the French Blue (Hope Diamond) to Louis XIV himself in 1668. To demonstrate his expertise, Tavernier produced narratives of his travels: Les Six voyages de Jean Baptiste Tavernier (Parts I and II, 1676) and Recüeil de plusiers relations et traitaz singuliers et curieux de J. B. Tavernier (1679). Copies of both the 1676 French edition of Six voyages and the subsequent 1677 English translation are held in Queens’ Old Library. 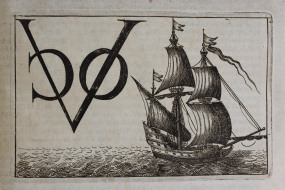 The powerful VOC (Vereenigde Oostindische Compagnie, or Dutch East India Company) was France’s main competitor for trade in the East

While combining the typical autobiographical and practical style of travel publications (such as a personal observation of the Emperor’s jewelled peacock throne), Tavernier also emphasised professional trade advice (for example, how to navigate roads, how and where to mine, and procedures for trading diamonds). Mindful of his intended royal audience, the narrative was unfailingly pro-French, anti-Dutch (France’s principal adversary at the time) and careful to downplay Mughal importance, power or wealth. As this plate of gems Tavernier supplied to French nobility illustrates (from the 1677 English edition of Six Voyages), he was sure to promote his own unique skills. Tavernier was rewarded for his efforts: he was ennobled by Louis XIV in 1668 and, with his new wealth, purchased the Seigneury of Aubonne.

Plate depicting the old Balmoral Castle. Purchased by Prince Albert in 1852, they had it rebuilt and it became Queen Victoria’s main residence in Scotland

Queen Victoria kept a daily journal from the age of 13 until her death in 1901, filling 121 volumes over her lifetime. Her first diary in 1832 began with the words, “This book, Mamma gave me, that I might write the journal of my journey to Wales in it”. While diaries are generally reserved for the writer alone, Victoria’s diaries were never private: her mother read the entries each day until she became queen, and two volumes from her visits to the Highlands were published during her lifetime (Leaves from the Journal of Our Life in the Highlands, 1868 and More Leaves from the Journal of Our Life in the Highlands, 1884). This published form presents an interesting crossover of travel writing and private journal. Victoria’s diaries were edited for publication but were not originally written with publication or a global audience in mind. Thus, their focus is not the description of a foreign place for a third-party audience, but rather the personal record of a queen on holiday. Likewise, their interest to the reader lies not so much in the description of an unknown place, as in the experiences of the author herself. Queens’ Old Library’s copy, the first American edition of the initial volume (1868), includes additional illustrative plates to engage the reader.

Not all travel literature is autobiographical in nature. Travel guides, like this copy of Things seen in Cambridge by A.L. Maycock (1936), assume an impersonal, authoritative and purely practical role, with the aim of helping their audience to travel rather than recounting travel anecdotes. As such they are generally more structured and comprehensive. Maycock offers his readers a thorough guide to the highlights of Cambridge (including Queens’ College), as well as cultural and historical context for the city and the university. 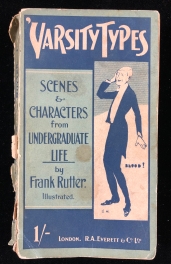 This is not to say that travel guides cannot be entertaining, though. Former Queens’ student, Frank Rutter, takes a satirical approach in his Varsity Types guide ([1903?]), offering an alternative ‘insider’s’ cultural context through the characters a visitor to Cambridge might encounter (such as ‘the snob’ and ‘the bedder’). Despite their differences, both guidebooks are in compact format to be practical for travelling; and, likewise, both provide an interesting snapshot in time of the city they describe.

The Words of Wander exhibition is now on display in Queens’ College War Memorial Library.

Tavernier, J. B., The Six Voyages of John Baptista Tavernier, Baron of Aubonne; Through Turky, into Persia and the East-Indies, for the Space of Forty Years (London, 1677)

Goodman, I., ‘Reading between the rhetoric: the aims and impact of French travellers to Mughal India, and their travel accounts, during the early decades of Louis XIV’s reign’ (B.A. thesis, University of Oxford, 2018)

Ticknor, Caroline, ‘Mark Twain’s Life of the Mississippi’, in Glimpses of authors (Boston, 1922)